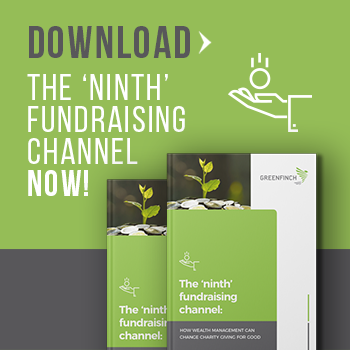 The Charities Aid Foundation’s 2018 report found that while charitable donations may have risen in overall value, they’re coming from fewer people. This is a significant problem for the third sector. Raising money is hard enough when you’re one good cause amongst many – but it’s even harder when the number of potential donors is shrinking.

So how do you raise vital funds in these competitive conditions? What do you need to do to make sure your fundraising strategy is on track?

The key to an effective fundraising strategy rests in knowing who has money to give, and who has the inclination to give it. This allows you to adjust your fundraising plan accordingly. Retail investors (i.e. those with money in pensions and ISAs) fit the bill, more than any other demographic.

In one study, the Institute of Fundraising highlighted the most common fundraising channels as TV, SMS, social media, telephone, door-to-door, street, direct mail and e-mail.

These channels represent a mixture of both traditional and modern ways to raise money: each one tried and tested. But it’s hard to stand out from the crowd and compete for donations when everyone is using the same fundraising methods.

The future of fundraising

So, what is the future of fundraising in the UK and how should charities amend their current fundraising strategy?

Research has shown that those aged 65+ give the highest amount to charity, and nearly half of UK financial advisers’ customers are aged 70 plus.

The potential here is enormous when you consider that at the end of 2016, the value of assets under management in the UK was £6.9 trillion. Even a tiny proportion of this money could change the fortunes of the entire third sector.

Wealth management represents an alternative to mainstream channels that may – with time – become as common as door-knocking, phone calls, or email marketing. It could even prove more lucrative for charities.

If charities want to continue raising money for deserving causes, evidence suggests that they’re going to have to reassess their fundraising strategy, and reconsider who their typical donor might be. If your charity hasn’t considered wealth management as a core part of its fundraising strategy, now is the time.

Download our ebook for more info on leveraging wealth management for charitable giving.